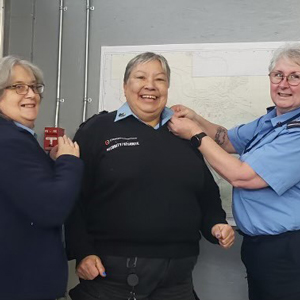 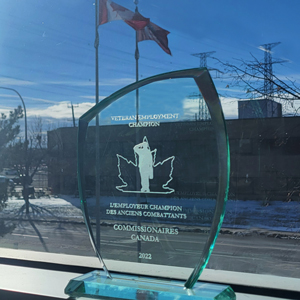 Recently, at an annual event hosted by Members of Parliament across party lines to celebrate Canada’s veterans and serving members of the Canadian Armed Forces and First Responders, the Canadian Corps of Commissionaires was recognized as a 2022 recipient of the Veteran Employment Champion Award. The co-hosts of this year’s event were Hon. Marc Garneau, MP, Hon. Erin O’Toole, MP and Daniel Blaikie, MP.

We have a rich, longstanding tradition of honouring military personnel and veterans on Remembrance Day and beyond. This year, Commissionaires decided to look inwards and asked our people what it means to them. Explore this special collection of interviews and discover what Remembrance Day means to our commissionaires, in their own words. 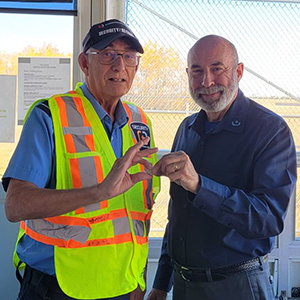 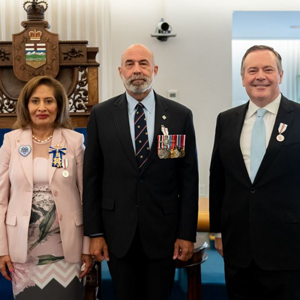 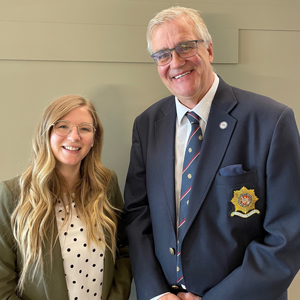 The Passing of Her Majesty Queen Elizabeth II

The Canadian Corps of Commissionaires is greatly saddened at the passing of Her Majesty Queen Elizabeth II. We offer our sincere condolences to His Majesty the King and to the Royal Family. 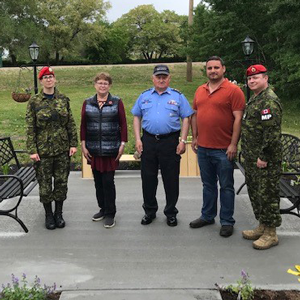 On June 11, 2022, the Military Police Platoon in Camp Wainwright opened a new rest area at their headquarters building. The rest area was dedicated in memory of two commissionaires, Gene Russel and Jean Murphy, who worked at Camp Wainwright. Gene was a veteran who joined the Corps in 2004. He passed away after a prolonged battle with cancer in February, 2016. Jean was a military spouse who joined the Corps in 2015, she passed away unexpectedly on August 23, 2020. At the dedication, Detachment Commander John Smith spoke about the dedication to duty and friendship both commissionaires contributed to the Wainwright community. 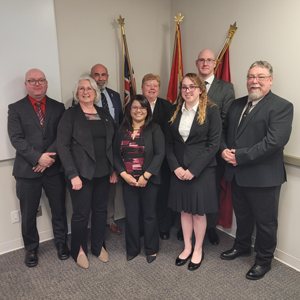 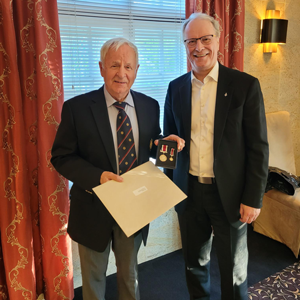 Recently, Governor Erwin Kilotat retired from the Division’s Board of Governors after 12 years of service. We thank Erwin for his contributions to Commissionaires Northern Alberta Division and wish him all the best. In the photo, Erwin (L) receives his Commissionaire Long Service Medal from board Chair, Major-General (retired) Tim Grant. 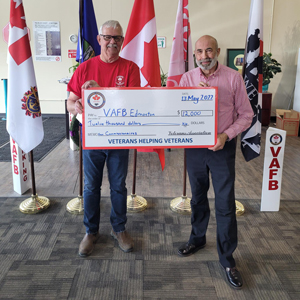 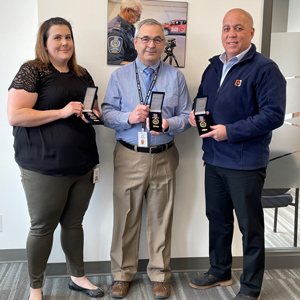 Meet the three individuals who recently received the National Commissionaires’ Distinguished Service Medal. Melissa-Anne Moore (left) is the Division’s Assistant Controller and a stalwart finance team member whose skill, dedication and experience has directly influenced the success of the Division. Darby Whitebone (center) is the Division’s Security Standards Inspector and a key command team member who has been a major contributor to the Division’s ISO9001 certification. Guy Robart (right) joined the division as the Quartermaster, became the “go to” person for all HQ staff when they had an urgent HR need and eventually assumed the role of Division’s Chief Personnel Officer. 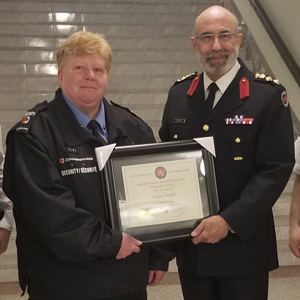 Meet the Employee of the Year for 2021

CEO John Slater (right) recently presented Commissionaire Claire Tearle (left) with 2021 Employee of the Year honours. Claire joined the Corps in 2013 and is presently posted at the Legislature grounds, where she is responsible for a large area with many different moving parts, including four Commissionaire guards posted throughout the grounds at different posts. Her demeanor and attitude, knowledge of the site, communications ability and management skills, and unwavering commitment to her post, define who she is as a person and what makes her a most excellent commissionaire who is deserving of this recognition. Congratulations Claire! 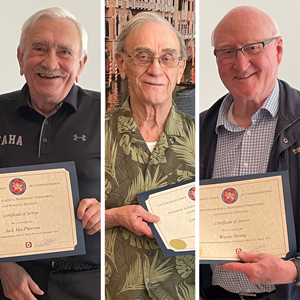 CEO, John Slater hosted a retirement luncheon for retired commissionaires who served a minimum of 12 years with the Division. Three individuals were able to attend and were presented with their certificates.

Left: Jack MacPherson had 23 years of service with our Division and worked at a number of sites in Edmonton during his time.

Centre: Before joining Commissionaires, Lorne Claypool spent 10 years in the Canadian Forces as a radio operator then 22 years with the Department of External Affairs. Lorne joined Commissionaires, Calgary in 1993, then Northern Alberta Division in 2002. Lorne served with the Corps for 19 years.

Right: Wayne Strong was with us for over 13 years and was a teacher for almost 30 years prior to joining Commissionares. He worked the entire time with us at Celanese. 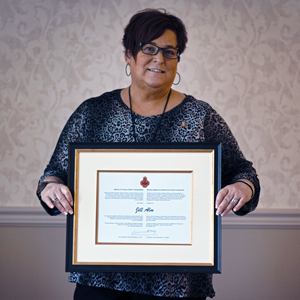 Our very own Jill Alm was recently awarded the Minister of Veterans Affairs Commendation in recognition for the time and effort she contributed to organizing and running the annual Edmonton Butterdome Remembrance Day Service over the last eight years. This indoor event, attended by over 6,000 participants and supporters in addition to being televised across Alberta, was the de facto provincial ceremony at which the Lieutenant Governor of Alberta presided. Congratulations Jill! 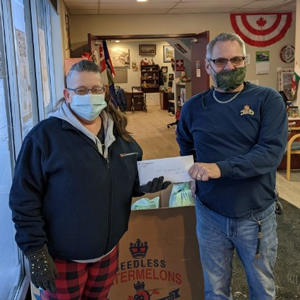 On behalf of the Division, Amanda LePage presents Michel Lavoie of the Veterans Association Food Bank – Edmonton with a donation of $370 and approximately 150 lbs of food gathered through the Commissionaires’ Christmas food drive. This is in addition to the $12,000 donated by Commissionaires earlier this year. 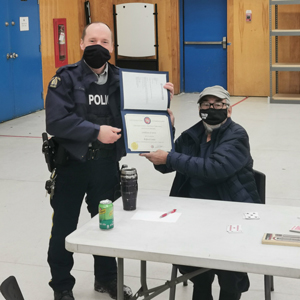 Commissionaire Detention Guard Wilfred Lennie in Tulita, NT recently received his retirement certificate from RCMP Corporal Carman Dutz after 16 years of service to his community. As a Commissionaire Detention Guard, Lennie supported the RCMP in Tulita by looking after the welfare of people in custody, enabling the RCMP members to be out and about the community. As a Metis Elder and knowledge keeper, he also provided invaluable guidance and counsel to the Tulita RCMP Detachment members. A great Canadian, Lennie will be missed. 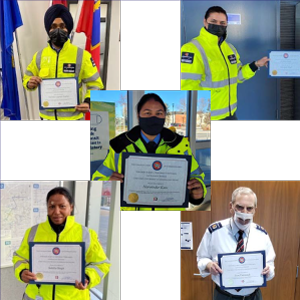 Over the past few months, several commissionaires have been presented with CEO Commendations for providing exceptional support on the job and/or excelling in specific endeavors. We are pleased to recognize the individual and collective efforts of Gursharanpreet Jamba (top left), Jasvinder Rall (top right), Harwinder Kaur (center), Sahiba Singh (bottom left) and Jean Patenaude (bottom right). These commissionaires stand out and, as a result, are being recognized.

We Will Remember Them

Commissionaires has a rich, longstanding tradition of honouring military personnel and veterans on Remembrance Day. On November 11, 2021, we will observe this day of remembrance throughout Northern Alberta Division, reflecting on their sacrifice and continuing to pay tribute to the Canadians who have lost their lives in military conflicts. 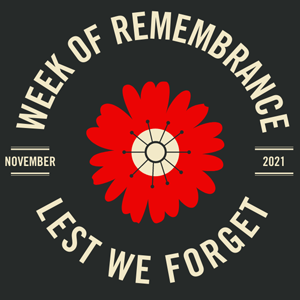 Every year during the lead up to Remembrance Day on November 11, we honour those who have served Canada in times of war, military conflict and peace. Join us as we reflect on their sacrifice and pay tribute to the Canadians who have lost their lives in military conflicts. 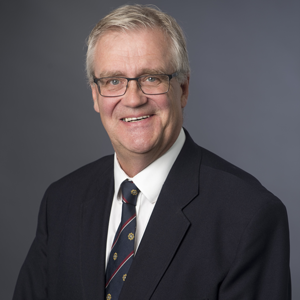 Learn more about Gord and his new role. 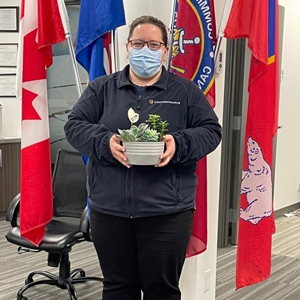 After 14 years of service with Commissionaires Northern Alberta Division as a dispatcher in Operations, commissionaire Danielle Urichuk is moving on. We thank Danielle for her service and dedication and wish her all the best. 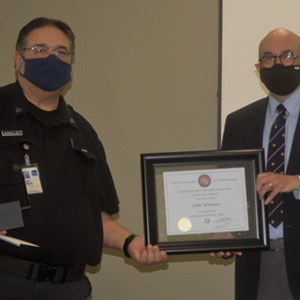 CEO John Slater (photo right) recently presented Commissionaire John Schmaus (photo left) with 2020 Employee of the Year honours. John Schmaus joined the Division in Traffic Safety Detachment in 2013 and during this time has consistently given beyond what is required of him on a daily basis. He is held in high regard by management, staff and our contract holders for his uncompromising work ethic, his commitment to results and the success of the operation, and the integrity in which he deals with his role and with others. 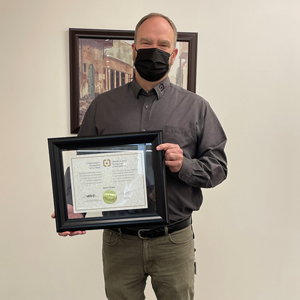 We congratulate Dean Hamm, Director of Operations at HQ, who was recently presented with the Commissionaires Distinguished Service Medal (CDSM). Dean joined the Division in 2016 after a 24 year career with the RCMP. A Certified Protection Professional (CPP), Dean has consistently reinforced Commissionaire’s reputation for quality service, demonstrated outstanding leadership and management, and delivered solid advice to counterparts in other Divisions that has had a positive effect on the greater Corps. His efforts are in the best tradition of the Corps of Commissionaires. 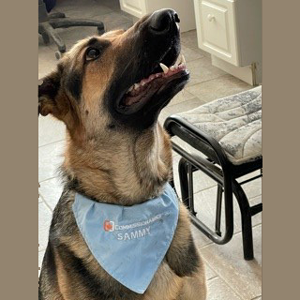 Honorary Employee of the Month

Commissionaire Sammy, the new wildlife control and alert dog at Primrose Lake Evaluation Range (PLER), an isolated area near Cold Lake, was nominated as honorary Employee of the Month for April. Sammy is being recognized for his always pleasant demeanor and professional attitude towards his work. He greets oncoming commissionaires with tail wags and kisses, and constantly reassures staff and contractors that the PLER camp area is safe and free of bears, coyotes, wolves, lynx, angry beavers, cougars, and more. He is always well turned out and wears his uniform (bandana) proudly, serving 24 hours a day, seven days a week without a complaint and just the odd bark. He only asks to be petted, scratched, played fetch with occasionally and kept fed and watered. Sammy is a great employee worthy of the Commissionaire of the Month award. 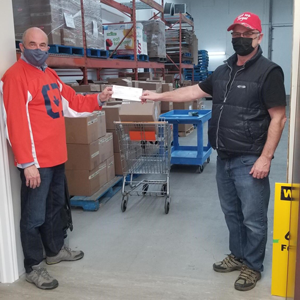 John Slater, CEO of Commissionaires Northern Alberta Division, presents John Kennedy, Assistant Operations Manager of the Edmonton Veterans Association Food Bank, with a cheque for $12,000 in support of Veterans and their families. 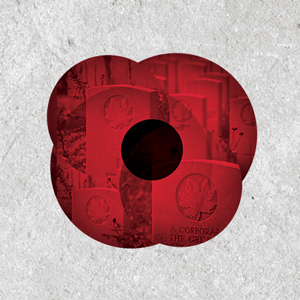 We Will Remember Them

We have a rich, longstanding tradition of honouring military personnel and veterans on Remembrance Day. While we cannot gather as we have in previous years, we will not let COVID-19 prevent us from reflecting on their sacrifice and continuing to pay tribute to the Canadians who have lost their lives in military conflicts. We invite you to watch one of the ceremonies that will be streaming live in the Edmonton area. 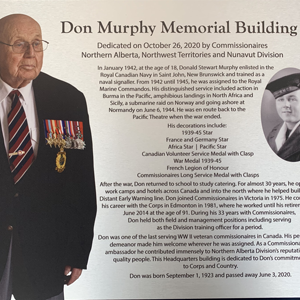 Building Dedicated to Veteran and Colleague

A small group of distinguished guests, colleagues and friends gathered at Commissionaires Northern Alberta, Northwest Territories and Nunavut Division headquarters in Edmonton to commemorate the dedication and naming of the building in honour of decorated WW II veteran and respected commissionaire, Don Murphy.