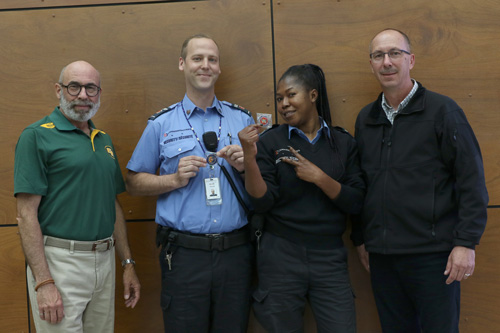 NorQuest College’s Commissionaires team play an important role at our college. They quietly keep our campus safe and offer assistance and help to students and employees when needed. Recently, two Commissionaires responded with kindness and understanding when faced with a tricky situation.

During an evening patrol of the NorQuest campus, a man was spotted at a nearby 7-11 wearing a Commissionaires parka. Commissionaires Aisha Ausman and Scott Taylor decided to investigate. At first, the man claimed he was a Commissionaire, but it soon became clear that this was a ruse; he was homeless and had somehow acquired the jacket to stay warm on the streets. Instead of using a heavy hand, Aisha and Scott treated the man with respect and had a conversation. Turns out the man had other Commissionaires uniform items, and these too were recovered.

“We wanted to make sure that nobody was impersonating a Commissionaire for the safety of the college and the community in general,” explains Scott, who has worked at NorQuest for over 10 years. “We don’t think he intended to cause any harm, but we had to make it clear that it wasn’t kosher for him to possess any Commissionaires items. Once we explained things to this gentleman, he was very cooperative. We showed respect, and he gave us respect in return. In the end, we gave him some money and hope it helped him in a small way.”

Congratulations to Aisha and Scott! Their compassion is a great example of the NorQuest values of fairness, inclusion, and understanding in action.