Commissionaire Goes Above and Beyond 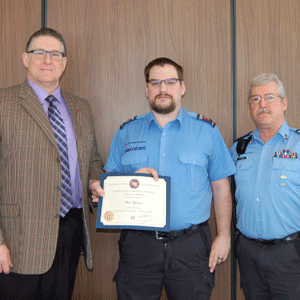 On the morning of January 5, 2018, while on route to the north parking lot by the former Remand Centre in downtown Edmonton, Commissionaire Alex Spicer heard someone crying in the distance.

As he proceeded towards the disturbance, he passed several people who indicated there was a woman standing on the 97th Street overpass, who was obviously upset. When he approached the area he saw another female talking to a distraught female, trying to calm her down. The distraught female was holding on to the railing of the overpass and had one leg through, threatening to jump.

Quickly assessing the situation, Commissionaire Spicer stepped back quietly, contacted his control office, requested they dispatch emergency services to his location, and then continued to monitor the situation. The distressed female then put her upper body through the railing, stating she was going to jump. It was then that he stepped forward and, after a short time, was able to calm her down to the point where she climbed back inside the railing. Another Commissionaire arrived, maintained a vigil and communicated the events to control. This allowed Commissionaire Spicer to continue to calm the distressed female and prevent the situation from escalating any further.

In time, the Edmonton Police Service arrived on scene, quickly blocked off traffic on 97th Street in both directions, and attended to the distraught female. While distracted by one officer, two other officers were able to pull the female to safety.

Commissionaire Spicer’s conduct is noteworthy, not only for his quick actions in getting emergency services involved, but more so, for remaining composed throughout. His calm, quiet intervention contributed to a positive outcome for this incident. Alex Spicer was subsequently recognized by Commissionaires Northern Alberta as employee of the month for January.